Weekly Journal: Protests in London, Tube Rage, Reading List - The Power of Habit by Charles Duhigg and other stuff 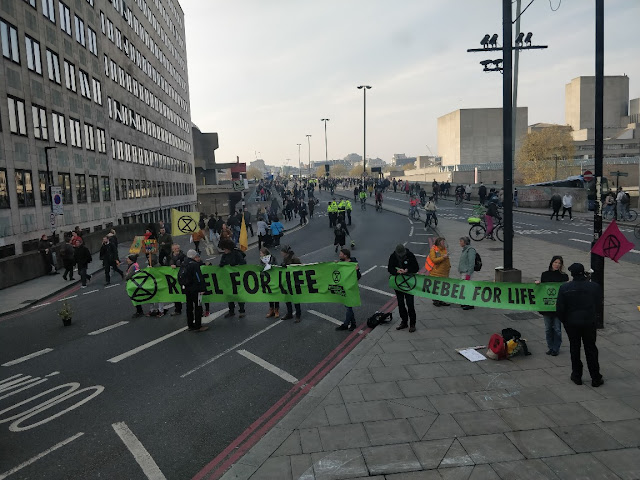 A few protests on Waterloo bridge affected me going to work the more economical way and doubled my travelling time. Normally, I'm one for the bus but there was so much traffic on the diversion route I got off and walked over the bridge to my connections. 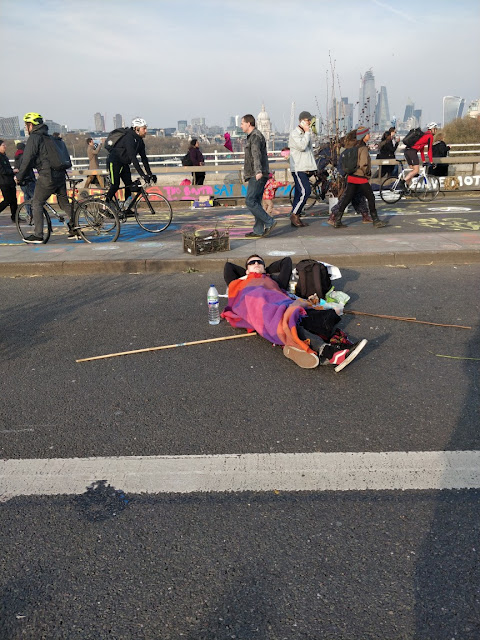 In the background is the city, and foreground is a protester just chilling on the road. I guess they didn't care about bottled water having a carbon footprint. Well, just saying. Love the trainers/sneakers. 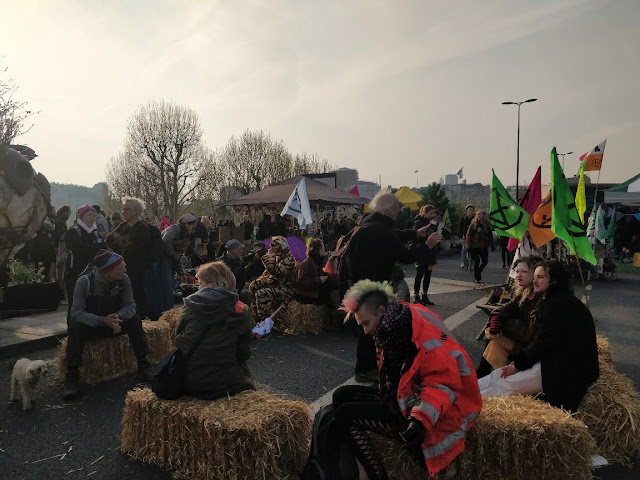 did cross the bridge to see what it was all about, but it tripled my travelling time. However it's nice to walk in the middle of the road with out getting run over. 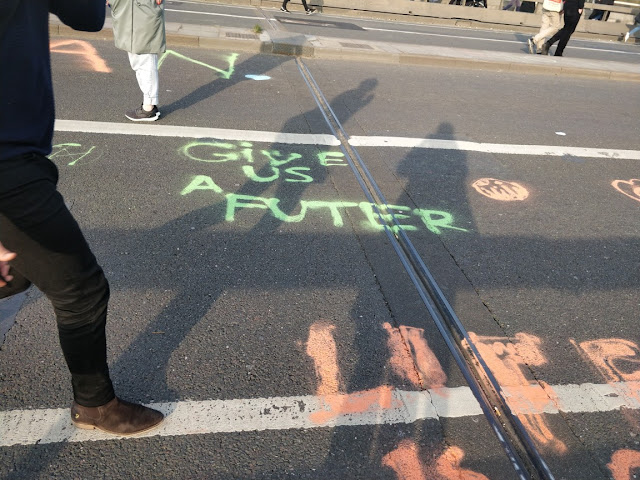 Yeah, someone can't spell future but I'm bad at spelling too, so can't complain or shame. 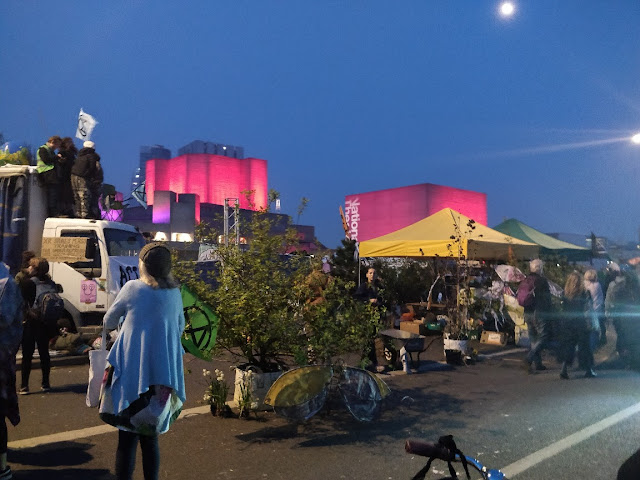 This was on the second day, when I went for after work drinks and didn't realise it was going on. So after walking to bus stop, I was too tired to track my steps back to the underground and decided to walk over the bridge. I got home about 10pm or something, late given I left the pub at about 8pm. This is faces the National Theatre.  There was someone giving a free gig in the van. No, I didn't wait to listen, I just wanted to get home. 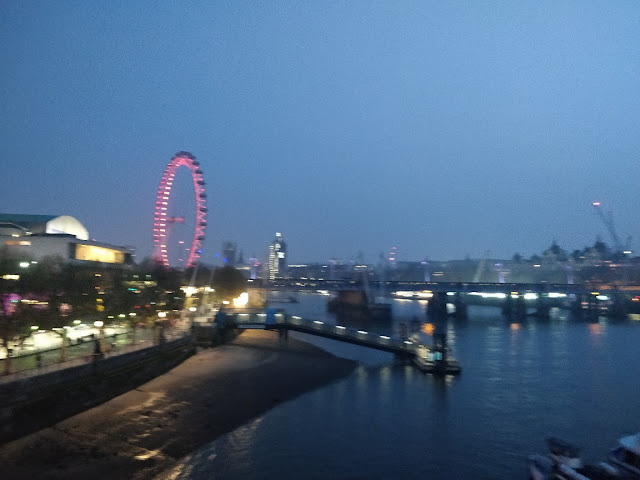 This is side is the London South Bank centre, the London Eye and in the far distance, Big Ben wrapped in scaffolding due to repairs and maintenance  but the picture is blurry. 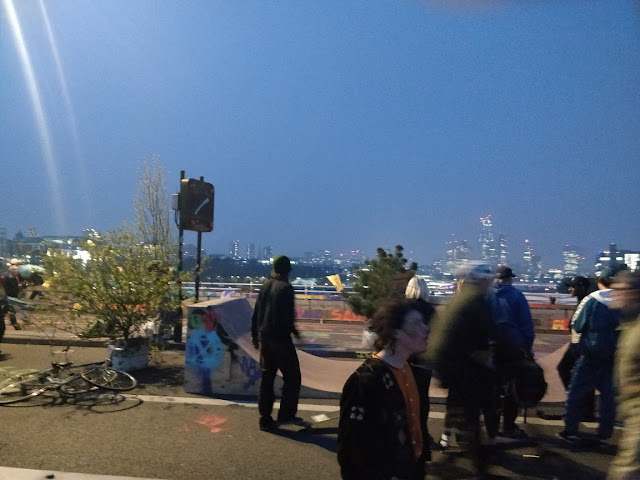 Yes, they even had a skateboarding rink. Anyway,  It is for a good cause but these type of occupation protests especially on the waterloo bridge, typically  mainly affect the low income workers who need to use the bus to travel to work.

So more or less a party atmosphere with protestors bringing awareness to climate control and environmental issues. Lots of folks just walking the over the bridge to the station, taking pictures.  however I think the authorities are trying to stop the occupation. We'll see. Until then, I shall be making alternative travel arrangements. 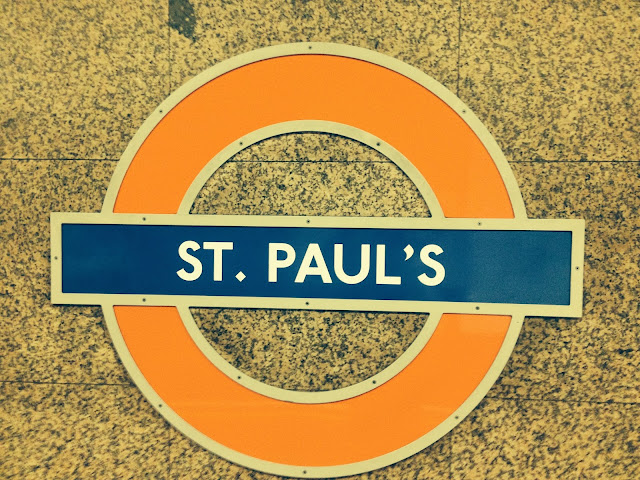 Travelling by bus to work is probably the most relaxing way otherwise with the underground it's so easy to get into the grumpy mood. So because of the diversions due to the protests,  making my work commute triple the time, I've had to take the tube.

So on the first morning after waiting for the bus I was about twenty minutes late, the next morning on my first alternative travel route the bus was a no show, so I had to walk to the underground station. Going down the escalators only for a lady with her cabin case to be standing on the left of the escalators. RULE IN LONDON - KEEP TO THE RIGHT SIDE OF THE ESCALATORS. So then I shouted - mainly because I was four people behind and others in front couldn't be bothered - in a polite way, 'COULD YOU MOVE TO THE RIGHT HAND SIDE, PLEASE.' 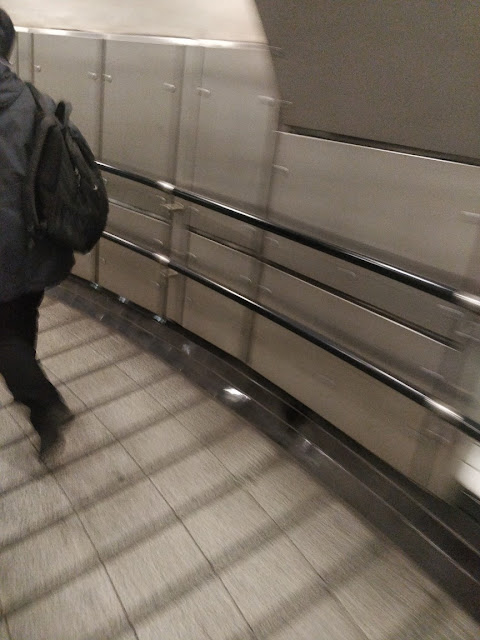 Come on now, a person sees the EVERYONE, is standing to the right but they need to be different to stand on the left side because of a clear path. NAH. This normally happens when people don't want to move down the lift/elevators or train carriages to make room for others. To be fair, I've been asked to move as well, so I understand at times we can be in a daze or world of our own and not notice people around us.

After that it's the battle of the tunnels. Oh the the tunnels, is I have to change my train lines and walking from one route to another can take about ten minutes. It may look simple on paper but it can be very complicated plus all crowd control. There are some stations, I typically used to avoid because it was easier to use another station or walk. London underground routes are complicated, then if you are real expert you get to know which carriage is the best. When I was at school, I know the carriages at the entrances and exit - this can cut about ten minutes off a journey.  Then there are also short cuts. Yes, the tunnels.

Anyway finally got to work and it took me about ten minutes to get out of the station. The station had multiple lines so I realised on line was nearer my work place exit, and it was easier to change to that route at a prior station then take the straight route. Complicated? Yes it is.

This is the rare occasion where I forget to take a picture of the book.

Director Boss is into coaching in a big way, and I borrowed one of his books. He had a stack of books kept in a cupboard for about six years, so I did a book grab. Yeah, I got this book, the Gold Finch and some book on Mastery...hey, a grab is a grab. A bit like a treasure haul.

With the habit book, I'm not holding out for much improvement because you know how I feel about these types of  books. Well if you don't know I'll tell you. MONEY GRAB. Yes, they lure you in thinking you can change your life, and you feel high for the first few chapters, then why trying the exercises you start feeling bad about yourself because you never measure up. After a while you give up. Or you finish the book, feeling very positive but nothing changes in your life.

So typically this book starts off with a case study of some ugly, fat and unhealthy woman (yeah, it has to be a woman) who has being dumped by her husband for another woman. Yeah, humiliated as well. Oh did I forget to mention she was also BROKE.  And she smoked. Bad, bad, bad. It didn't say whether the her husband's new woman was slim and better looking. Anyway, fat, ugly and unhealthy,  broke and dumped woman goes on a trip of a lifetime and CHANGES her life. A great reveal happens and she slims down, becomes beautiful (not sure how you can go from ugly to beautiful - like just saying - maybe it's because society views fat women as next to ugly), she runs a marathon and buys her house. More importantly she gets a MAN. Yes, she is now the opposite of what she was.

Well, darn it, I'm sold. I'm overweight, very overweight. I'm already interested because this woman started off a loser and now is a winner. She was failing at life - whatever that is, and now she's successful. But is she really winning or successful just because she is outwardly slim, considered beautiful, no longer broke and has a man. Yes, though are metrics we can see and judge life by, but does that mean she is actually successful? Don't know. But I'm intrigued in whether this book will help me change my life. It can't be that hard can it?

So I finished the book, it's okay but application? Well it's in the appendix so if you really want to change habits without reading everyone just turn to that part and then you can read the rest at leisure. Does it work? Well, it makes some assumptions that your habits are fixed and the same whereas my habits are rarely that. Like I may do something consistently for months and then suddenly change my routine when bored, however I'm sure there is something useful for everyone to take away, just don't expect miracles. I think I'm going to remain overweight for the time being, as I said no miracle solutions. However I did ponder a few things.

Anyway, Director Boss asked if I'd finished and I said yes, so Frontline Boss (my manager) borrowed it, this means I don't have it to read again. I guess I could borrow it again.

For those who like to read: https://charlesduhigg.com/how-habits-work/
For those who can't be bothered and like Youtube https://youtu.be/W1eYrhGeffc
For those who don't trust external links just google or YouTube - CUE, ROUTINE, REWARD, HABIT and a ton of stuff will come up.

The is bad new because I get distracted very easily. I've managed to reduce my social media forum engagements but without this block, it will probably go up again. I need to get a block sooner than later.  And no self discipline doesn't work against the the fear of missing out (FOMO) or procrastination, or getting involved in heated writing debates. 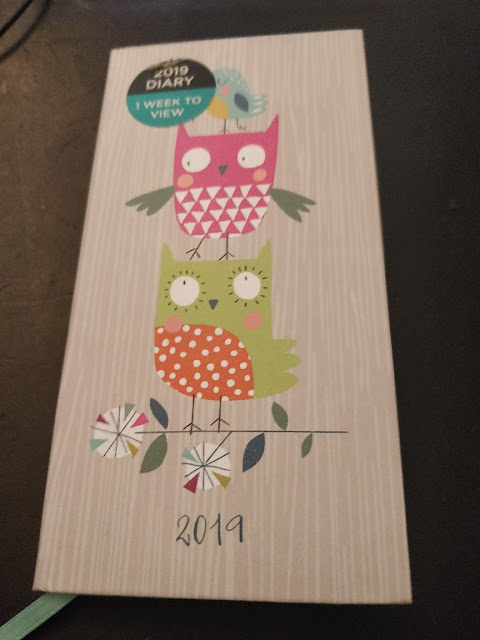 I kid you not. I know it's four months into the year, but I had to.  My new role has so many meetings, and timelines that it's too tedious to manage on my email calendar or even phone, so I just bought a simple diary. At first one of the managers had one on his desk and I was about to open my big mouth and say something sarcastic but it's a good thing I didn't because now I completely understand why now. So yesterday, I popped into the stationary shop and got myself one. Needs-Must.