Show me your desk - same old cluttered desk, getting over the editing crisis. Crisis Update with sample 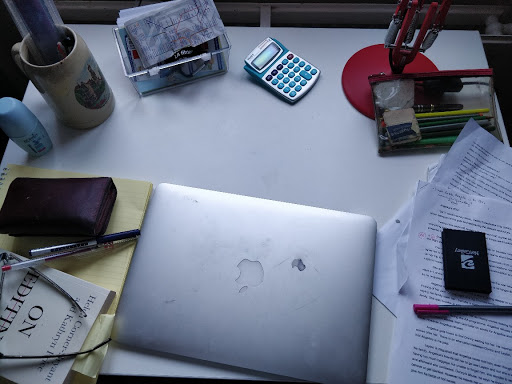 I'm still thinking and pondering over the editing options from yesterday but after a walk into town and a nice massage I thought there must be a way through this after all I have now attended two editing courses, the worst one was Curtis Brown (the editing bit was useless but agent was fantastic), my judgement is still out for Holly Lisle though I feel it's a good course though a little too detailed, and an editing conference. Hey hoy, let's roll on with today.

As usua, I'll start from the lower right  hand side and working clockwise. First is a pair of my reading glasses, under that is my copy of On Editing : How to edit your novel the professional way by Helen Corner-Bryant and Kathryn Price. I was actually following this before I decide to take the Holly Lisle's course. The thing is being dyslexic, working through books can be a chore, and this is pretty dense and packed with information. Also I feel following books can be somewhat rigid and inflexible rather than a class, in that one tries follow everything to the letter.

Their course is one of my dream courses but at £1,800 it's pretty much out of my price range - I think there is an early bird deal as well. However, I've heard very good things about it, so it's on my wishlist. But for now, since I'm feeling a stuck, I'm working my way through it.

Underneath that is my new yellow pad, I thought I'd threat myself to some stationary or notebook.  Moving on is my deodorant I use Bionsen. It's aluminium free and supposedly good for you. I've been using it since my early twenties, I think an old boss recommended it before that I was a Sure- girl. I've the spray, gel-stick but over the last few years, I've stick to the rollon. However once in while, I use other brands.

The next are the usual suspects, my pack of pen holder,  scenecards, desk lamp, and pencil cases. After that is a pile of working papers with a pink pen and my NetGallery post-it notes.

The first pile is my synopsis and that has been marked up in pink pen for characters' arc. I've also discovered that lead character, Angelica, doesn't really have a goal per se and she's actually running away from something.

I'm using the posh editing course outline to work my way though the copy of Helen Corner-Bryant. I know it's not the same, at all. Not even 1% but it gives me an outline. So a suggestion was changing POV. I prefer to write in 3rd person point of view (POV) but I changed it to 1st Person POV.

This is an except from chapter 6 changed from 1st person POV to 3rd person POV. It's probably going to change. It contains swearwords and cursing and a whole load of sex - the novel is sexual explicit.  It's also a very rough draft and I'm still considering if some elements make the final book...


Synopsis to give context

Cautious ANGELICA WASHINGTON was her family’s go-to strong woman, had a successful career and played mother to her brother’s children– until drama struck a family therapy session. From that moment everything went wrong.

A night at the club, leads ANGELICA to overcome her cautious ways and spend a night of intimacy with a dark blue-eyed stranger.

It was supposed to be for one night only but circumstances lead them back to each other, and many passionate nights follow. When LEYTON THOMAS starts to question his feelings turning deepening from lust to love, can ANGELICA believe him? Can she left go of her past and embrace the future with new love?

Can she? Will she?

It reads a lot better but I'm not sure. I know most self-published romance books are in the first person POV but it means changing the entire novel and then deciding am I going to give Leyton's story as well. In 3rd person POV, I just head hop or whatever. In first person, I need to strictly stick to one person per chapter. We'll see.