Film, Movie or Boxset Night: The Gospel According to Andre 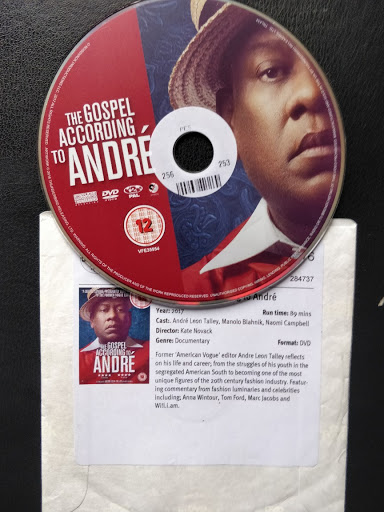 This was an impulsive choice. I saw him a clip of Andre Leon Talley being interviewed on Youtube, maybe it was Wendy, I'm not sure so when I saw this as a choice in my DVD club, I chose it. So it's a documentary about his time in fashion.

Andre Leon Talley is a legendary fashion editor and journalist. He has worked and still does pieces for Vogue magazine etc. He is a respected authority of fashion and how you get to know that was who turned up to show...I mean who did interviews. So heavy weights like Anna Wintour,  Tom Ford, Marc Jacobs, Diane de Furstenberg, Manolo Blahnik, and Valentino Garavani clear their busy diaries or schedules to make time for this documentary you know Andre is respected.

So the documentary is very complementary towards him showing him as a talented and gifted fashion journalist which he is. It also covers a few touchy bits like the racism he encountered and rumours that he was sleeping with people, rather designers to gain access.

However what's most obvious are what or who was left out. So no interviews from Ralph Lauren but I guess he is gloried and, frankly, overpriced casual wear. I mean what does a pair of jeans and teeshirt mean in fashion? But I guess what I learnt was fashion wasn't about status or money - looking at those overpriced Ralph Lauren jeans but more about beauty and style. Let's face it, if wearing Primark or Gap jeans gave a nicer fit than Ralph Lauren, which would you buy if you driven by beauty and style over money and status?

I guess the fashion world like everything else is now run by business men/women and everything is about profit so it's all about sales, sales, sales and has switched to money and status over beauty and style. Moving on...

Eboni Marshall Turman an assistant professor in Yale was interesting, I think Marshall Turman needs to work finding her voice as a preacher  (as in public speaking) rather than imitating old school orators. It's quite interesting that though that style works for most preachers, it will not work for all. Because thought her sermon was pitch perfect it was empty and devoid in someways.


Andre Leon Talley: The Man Behind the Success

Despite a very successful career in fashion, it's hard not to see how unhappy he is. He is this obese tall man who lives alone. His home pays homage to his perfection and past. You can see Andre comforts eats and has not even a little dog, or cat to keep him company. He keeps people at bar, and at a distance. Yes, he has close friends, and even family but you get the feeling they are at a distance and Mr Talley is a perfectionist. So much more a perfectionist than others that he can't bear to be with others.

Also as a fashion visionary, he lives in his own world - a world of beauty, style and escapism. So overall, I learn a lot but I also felt a sadness to be left with an image of great man who comfort eats. So I know he was on a diet but I don't think its about diets or weight loss, rather finding out the cause behind those.

And there are two areas - lack of close companionship - this can be even a pet, and the fact he isn't actively working. However for companionship, Mr Andre Leon Talley will have to be less of a perfectionist. Companionships are about tolerance and compromise. Even a pet dog or cat will be peeing around those prized possessions but at least it brings life and love with it. Just saying...

It made me ponder life, and being