Monday - show me your desk! Clutter desk with books, purse and iPad. 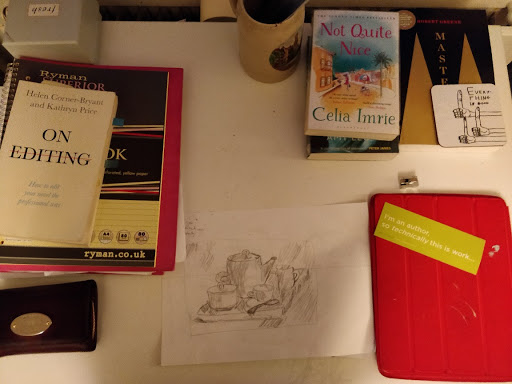 As you can probably tell by now, my desk acts as extra storage space. So as per normal starting from the lower left handside. That is my burgundy or red wine mulberry purse. I got it in the sale a few years ago, at House of Fraser, I like high end designer bags because they tend to last longer, saying there I have two I need to fix.

One is a Gucci messenger bag and the other is a Hispanitas but I think it will cost far more to fix them than the what I bought them from. The Gucci is about ten years old and Hispanitas probably older - note these are just daily-use (hence the state) casual bags. The messenger is really grubby and I was going to throw it out, but who throws out a Gucci bag? Anyway, let me not digress.

Moving up is my copy of On Editing by Corner-Bryant and Price which I've been actively using. Some greats ideas and not so great ideas, but on the whole I'm finding it value for money. So I'll be using elements of it for the next draft pass. Under the book, is my novel-in-progress notebook and then the folder with the manuscript.

Beyond that is my box of posts-its. The Fresh Box originally had some soap in it which as wash away all my sweat and tears. It was a gift from Sis. Moving to the right, my pen holder and a new book I'm reading. I haven't started it but Celia Imrie is one of my favourite comic actresses. Underneath that the Innocent Wife by Amy Loyd, and I have finished that. It's a story about a stan or super-fan of a death row prisoner who eventually marries him. It's different from the usual psychological thriller, in that it's written in the third person point of view, and it feels almost documentary-like. Very factual. I read on Goodreads (I tend to read reviews after I've read the the book), it was based on some Netflicks series. It's also rather graphic and gory in bits, I just picked it up out of interest. In the UK, that's all the seems to sell.

Next to that is the book on Mastery, yes, I think it's been on my desk for nearly a while now. Moving down towards the lower right hand-side is my pencil sharpener,  iPad and a Society of Author's bookmark which says 'I'm an author so technically this is work'.

Finally, a pencil drawing of still-life objects - a tea-set on a tray.