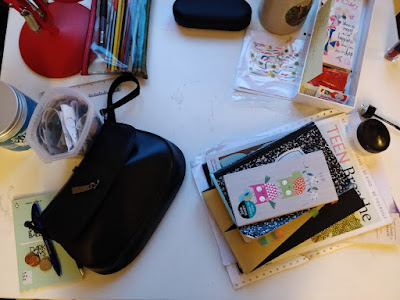 A messier desk than usual today. So starting from the lower left handsome, there is my Baldwin book of essays, I think I shall return that today. On top of the book are some coins, a pen and my handbag or purse.

Beyond the handbag is my Friday money pot,  where I put my weekly 52 week money challenge cash. Next to it is the coconut oil, I use for my hair, and an old ruler. Yes, sometimes the desk acts as a dressing table. Just sometimes.

Then the regulars - my desk lamp and pencil case. Next is my glasses case and penholder, followed by a greeting card. I used to make greeting cards so that is one from a long time again. Maybe I should start again? I used to be into crafts and I hand made invitations. Big Momma makes cards, and sells them at markets.

Not to digress, and moving on. The box which contains the sauces, and that is an old diary. Yeah, a week later, I still have the liquid lipstick brush squatting on the desk, and black cover is my face cream. I should get round to doing something with it, it's just I've found an alternative lipstick.

However I've been pondering the question 'How do you know when the mascara is finished?' If you have tips let me know, comment below.  Only because, I've never finished a bottle of mascara.

Finally is a pile of books and papers. On top is my current diary which reminds me I need to book some time off work. I'm not having a typical summer vacation due to changing jobs. I normally go to Catalonia, Spain in May or June, once in September but that is at the end of the holiday season and I found the hotels aren't as good at the end of the season. Under the diary is a writing book called the scene book by Sandra Scofield which I've found very useful in analysing different scenes. Then there is a magazine called Teen Breathe which is a spin off from the main magazine Breathe. However I've found this a better and more thoughtful read than the main magazine.

Under the magazine is a stack of papers I need to sort out.

I don't know how people keep a clear desk, I have no clue. My former boss who is amazing, always kept and still keeps a clear desk. And at the end of the day, he would wipe it down. Disinfect the desk. Then again he is the most organised person I know. He put the O in organisation. Great leadership skills too, because when I worked for him, the team was rarely under unduly stress. Work is already stressful enough, so when you work for a boss that can't plan or has no sense of time or the bigger picture....that's stressful.