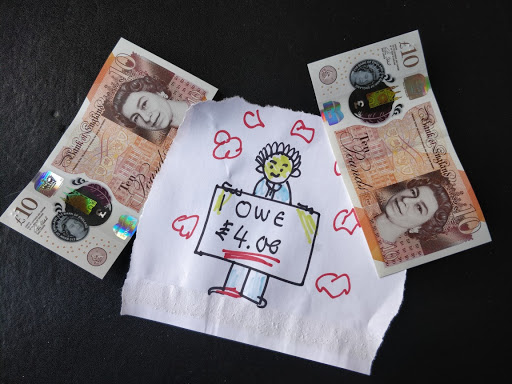 No change, though I managed to get hold of two twenty pounds notes, it would have been less if someone had been serving customers behind the till of Itsu - an Far Asian inspired food joint that sells mostly Japanese-ish food for the western appetite. I say Japanese-ish because it's not really Japanese food, just inspired and concoctions.

Anyway I come home sick from work, and decided I needed a nice big pot of steaming ramen but there was no one at the counter, so feeling ill and irritable, I came straight home, therefore not breaking into the two ten pounds note above.

I had no change so another IOU, but for the wrong amount, I guess I lost a pound to the money pot. 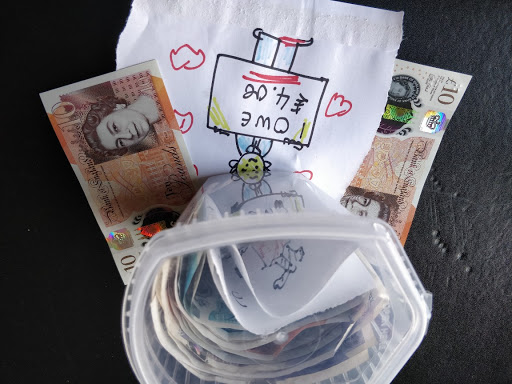 Oh, apologies the picture is up side down but money is money, you can still the money pot and notes. I have a family house guest - Big Momma, who seems to have an interest in this money pot and savings business.

So this recently she asked me when I was going to pay up the IOU for last week which was twenty-two pound sterlings. I told her I didn't know. The acknowledgement of debt is there but I don't know, it's not as if the money pot is going to send red letters or bailiffs to my home. Then Big Momma started to give some advice but I stopped her by asking would she pay up for the IOU. She paused in her tracks and basically said no. That was the end of conversation. However she did make her point clear that IOUs where not good practice, I guess the same applies for getting random money challenges off the internet. 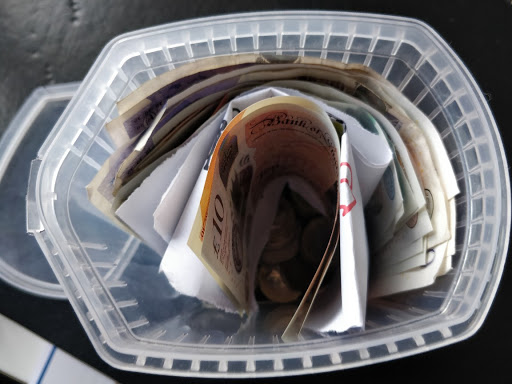 After a rest in conversation, Big Momma wanted to know how much was in the money pot. 'How much have you saved?' she asked. 'It must be a lot.' This is what happens when family follow your blog. So reluctantly, I counted out the notes - just the notes not coins - and it came up to about one hundred and seventy five pounds in notes. 'That's not much,' said Big Momma looking vaguely disappointed and I just shrugged. End of conversation. Big Momma is holidaying/vacationing until the end of the of week.

It sounds about right, since I missed the first six weeks and started in week seven, so it will be about twenty-one pounds down. Maybe I should do a tally but it's too much effort, it's bad enough putting money in the pot, now I have to keep a record? Nah...I know this week it will be technically one pound over in IOU.