Waitrose christmas treats samples on display. Travelled to Milton Keyes for a conference.


I went to Milton Keyes today for a conference which was great and well worth attending. It's to do with my profession. The great thing about meeting other professionals in your field is that you find out you aren't alone in some experiences. Also there was advice, and good words to take home. So it was very positive and uplifting.

We had two fellows of the professional body give an presentation and answer questions. As well the active associates for organising it. It was well worth attending. In fact lots of people like myself travelled from all over to attend this event.


This is a picture inside the Virgin Train. It was okay I guess. Still a bit cramped. What I noticed is that first class was a lot smaller than the old intercity seats. I sat behind some TV production staff who were name dropping and saying how they had to attend certain shows and laugh on cue.

To be fair I've been to two filmings of TV shows. One at the BBC TV centre in Manchester where you are given cheap wine and instructed to laugh and clap on cue. Then I visited the Alan Carr Show in the London.  The staff weren't as nice as the BBC. They were pretty snobby and again we were told what to do.  All this were a few years back so might have changed. 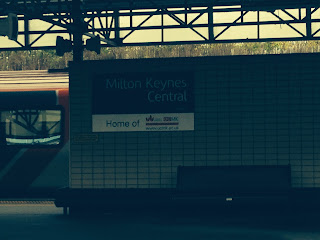 Stood out station. I haven't travelled by train in a long while but all the routes are owned by different companies which makes it slightly annoying. In the past one could just hop on any train. Now it's Midland this or Virgin that. 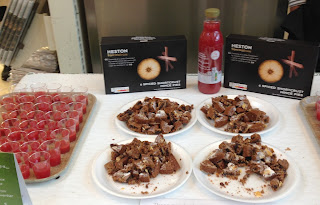 I feel asleep and woke up at my destination. Good thing it was the last stop. Popped into the local Waitrose where they had some food tasting on display. The Heston mince pies tasted nice. More filling than the normal brand.

I had a little more of this.

Nothing much apart from that. But I guess making a trip to another city, doing a bit of networking with fellow professionals and coming home is a lot. I also have lots to think about.