Not going to the gym.Supermarket prices creeping up for Christmas Holiday. Still on 5.2 Diet on the second starving day!

November 23, 2015
I've never kept a diary or journal. Not a complete one. The last complete one was when I was about 15 years old and was only because everyone else was keeping on. You know the whole 'teenage secret dairy' with lots of hearts with hidden crushes and stuff.

So this is kinda something new. Anywho. Went to work and it was so so. Deadlines coming up. Then I'm on the 2nd of 2 day of 5.2 diet. I'm sure I eat way more than what is allowed. Anyway I had some pititful fruit salad for breakfast. Got that from Sainsburys. Then some bean salad which I had with jacket potato. Got into the whole 'exercise vs diet' debate.

My colleague also gave good advice about shopping online. She's addicted to special offers so says shopping on-line cuts it out. I know that when I used to go to weight watchers, yeah, I did, the leader suggested that helped too.

I dislike exercise  and I know this is fad but so is exercising. I start with an expensive gym membership - which by the way I still have - joined about this time last year. I go a few times then quit. Okay I frequently go for hydropool and steam. Maybe a run now and again but nothing to justify the amount spent on membership.

My boss who is super fit. I mean super fit, says I should walk more. I tend to take the bus to and fro to the train station, she does a brisk walk, swimming and spinning. And other stuff. She's super fit. I once did the gym for a week running but fell out of the routine. I have lots of excuses so no point listing them here. Just fair enough to say, I'm not a gym bunny.

Stayed a bit late and was starving so I had a tinned of sweetcorn, I'd stashed away in the office kitchen cupboard a while ago. I meant to have it with tuna but never got round to opening it.

Came back home. Nothing interesting apart from stupid people who never move down the train carriage. They like to hang at the doors. The most annoying thing is because of these dipsticks I miss out on a seat. Some one who comes in from another door naps the seat before I do. Another grip is when people start getting fidgety or shifty or packing their stuff together before a stop. Normally a sign they are going to get off so I can have a seat. Not. They are people who just do that for the stake of doing it. Annoying.

Still starving I went to my local supermarket to get something to eat. Ended up buying some mangos which have increased by from £2.50 to £2.75. Supermarket prices are creeping up for Christmas. In the Britain the most expensive time to go food shopping is Christmas Eve. Around now everyone starts to slowly hike up prices or do those Christmas specials. Which reminds me my colleague is looking forward to Black Friday shopping. Not that we have that here in the UK, but he's taken off the day. Last year it was a big thing so maybe he'll get a plasma screen for a tenner. 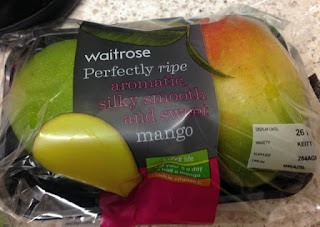 I actually went to the supermarket for some Edmame beans but they still didn't have any. Got some grapes too. I know out of season but it's either that it breaking this day on some chocolate or huge chunk of bread and better.

My critique partner finished my last chapter with great suggestions. She's been so supportive and had really kept up my motivation and morale when writing this novel. It's nice when it's not just family reading stuff.

So I'm thinking of making into a series and a few spin offs. We'll see. I'm pondering over some so probably might write those at some point, maybe even before releasing this one.