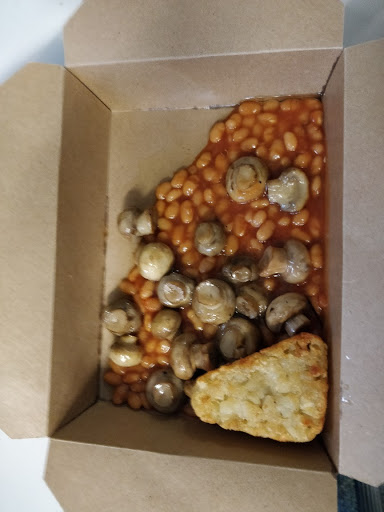 My new workplace offers breakfast. I was told it wasn't very good but I decided to try it since I doing a a semi-non wheat detox. How's that working? Well, it's the 20/80 rule my way. Let's just say, I've cut out a few treats unless they are irresistible. What is irresistible you ask? Reduced pastries thought I managed to avoid buying any yesterday. Or passing through an artisan bakery on empty stomach, actually just passing by a bakery does it.

So is pretty much my breakfast until I get something sorted out in the morning. Also the weather has been wet, grey and cold,  so I wanted to eat something warm, comforting and sweet.

Are there cheaper options? Yes, there is porridge - oatmeal -  but I don't like the look of the consistency or texture. I'm fussy about some consistencies and food textures unless I make them myself. It's just an appearance thing. I'm sure it's really delicious but I tend to only eat porridge I make.

Maybe I could try it...it probably tastes really nice. My grandfather used to make porridge with butter and full fat milk ....I know. I like mine with brown sugar.