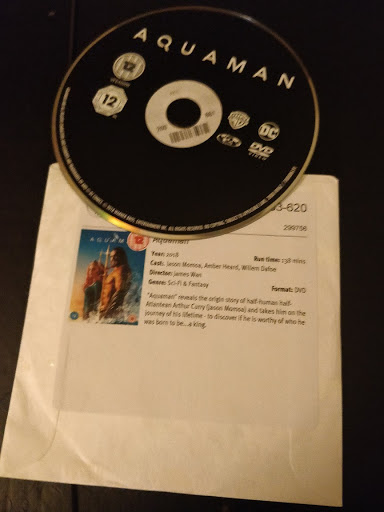 This is really for the big screen with all the CGI images and plenty of stunning visual special effects with great fantastical  undersea creatures and creation of an underwater world. Just lots of craziness. There are also great fight scenes, explosions and chase sequences but very little on story line - well it's a simple very simple linear story. It's also a little long just over two hours but overall, if you don't like to think too much and want to escape into something simple and easy to watch the probably try this. Also if you have over 12 years olds (or mature enough) and need a nanny this should keep them occupied for while - but note it may be a little too long so they could get bored.

I watched it with Big Momma and she said it was like a video game, and I thought yes, it was.

It' starts off a bit slow and messy but after a while the real story starts. Basically it's quest and adventure story with a number of trials to find the true king of Atlantis. So no real surprises but isn't every other movie a quest story? So it starts with Nicole Kidman, queen of Atlantis coming up the surface, running from an arranged marriage. She hooks up with a light house keeper who becomes her baby daddy. After a bit of drama, she goes back to her home, time passes and a few reveals.

Anyway a few other reveals, and basically the underwater world of Atlantis declares war on surface world - us to you and me -  and it all kicks off - however 'you know who' has to stop the war between land and sea.  Okay, I'm missing minor details but to give it away will be spoilers, and yeah that is essentially the story.

It's pretty predictable and clumsy in some areas, awkwardly so. There are a few comic areas and it does start off very slow but if you can get past it and want to watch a mindless bit of escapism, go for it. It's hard to knock because if you don't like the story, you'll love the visual effects and costumes. Note nothing in this story is truly original but who cares? And what really is? It's a big budget and it shows, it will be excellent in 3D.

Overall, good but predictable quest story, great cast restricted by a rubbish script but still great fun to watch. Hit or Miss? Not sure, but just make sure you get past the slow bits to the special effects before you make your decision.