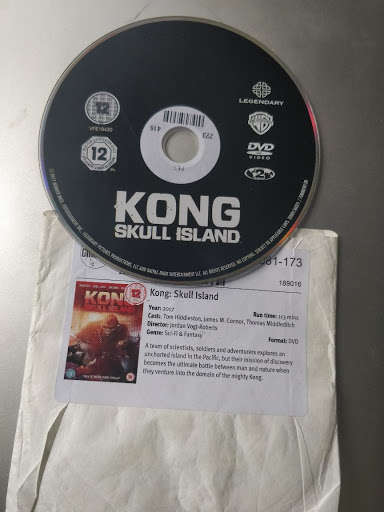 Hollywood is OBSESSED with Kong! Anyway, this is yet another remake the old classic, and again I'm watching it - mainly just for a movie to blog about. I saw the one with Jack Black, and the classic when I was a kid. This one starts Samuel J Jackson and Tom Hiddleston, where Jackson acts a crazy war obsessed soldier and Hiddleston  - not sure. what his role was really...a tracker but he was some kind of potential bad boy and potentially romantic hero. John Goodman also makes an appearance as the mad scientist but in a similar role to Jack Black's role in his version of Kong.

It's essentially an adventure movie with a high body count caused by monster predators. Yes, I found it a bit scary and violent (with hungry monsters upping the body count), but there was also an underlying story of true love, kindness and respect (other people or creatures spaces). Apart from Kong who is just one of his kind. Maybe they could do a movie where he finds a kong mate of his kind and size? Rather the cliched version. It's always a bit sad that Kong is lonely - it must be the romance writer in me.

It's hard to say much without spoiling the film because it's an adventure plot. But basically a group of scientists with a group of soldiers go and invade an ecosystem island and wreak havoc. However natural inhabitants come fighting too. So it's a bit like Jurassic Park in some instances but different.

Great CGI graphics, huge ugly reptile looking monsters. Actually why do reptiles and lizards always get a bad deal in these movies? Reptiles really get a bad deal when I think of it. Even from biblical times of creation, thinking of the serpent - we don't really know what a serpent looks like, yet everyone assumes it's a snake or reptile. Just a thought. Oh, and Kong does the classic Kong move of beating his chest and roars. Lots of men love to do that move....you get me....

Overall fantastic fight scenes, man and beast, reptiles and kong. Big guns blasting, and as I mentioned a high body count. Not everyone makes it out alive which is why I'm not too keen on these types of films. I like happy films with zero body count. However it's worth watching if you just want to sit back and not do a lot of thinking.  Great ending, and do wait for the credit for the roll because the true ending lies after they roll.