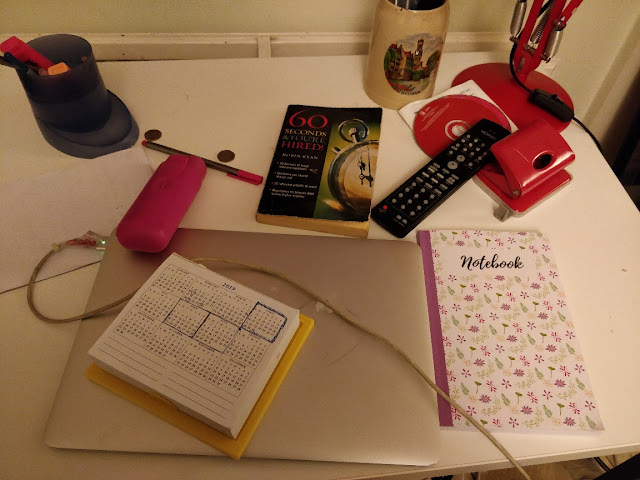 It's tidier than usual because I have to focus on particular tasks. Maybe I'll try and work towards a clear desk policy but probably not in my nature.  My former boss says creative people normally have untidy desks but I think he was just being nice.


Desk focus: 60 Seconds and You're Hired by Robin Ryan

So I'm currently interviewing and 60 Seconds and You're Hired by Robin Ryan is one of my favourite go-to interview practice books. I've had this for a number of years, actually I bought it in Borders either the New York or London branch, I'm not sure now. Anyway, it shows you how long I've had it for. And whenever I'm in the job search/career development phase I bring it out.

I've actually never completely read it, I bought it for the first three chapters, and it's really good for polishing up interview techniques. Normally after a few years of enjoying a role, it's time to shift or go for promotions and I think Robin Ryan's 60 Seconds and You're Hired helps.

I like her 5 point Agenda and 60 second sell chapters, as I've said, though I've had this book for many years, I haven't read the rest of it...probably because I have other books and information that deal with interview questions better.

It won't get you a job, as that is up to the interviewer and competition but it will allow you to prepare for interviews.


Other things on the desk

My worn Apple MacBook Air plug...yes, that's something they don't tell you about Apple products - they tend to wear out quickly. I've had a PCs and PC laptops for years and never had fraying wires. I probably need to take my MacBook into the shop because it has some missing screws. Back to the plug, so I had to go to the hardware shop and get some insulation tape to cover the exposed wires, disclaimer I DO NOT ADVISE THIS AS IT IS RISKY AND A POSSIBLE FIRE HAZARD. PLEASE DO SO AT YOUR OWN RISK.

I generally find out Apple wires tend to quickly fray - the same happened with my iPad wires.

There is my colourful notebook, a desk calendar - I should be ripping up the pages but I find just having the entire calendar more useful. I've the months mapped out are key months and busy periods in my  career.  It was just trying to look at the recruitment trends that coincide with these times. Then there is my plastic glasses case, I use this case because it's more hardy for my glasses, and finally my red anglepoise desk lamp.