Weekly Round up: Cakes from Konditor, London Closed for Cyclists, The Stone of Free Speech Writing Progress.

Cakes and Crumble for Konditor 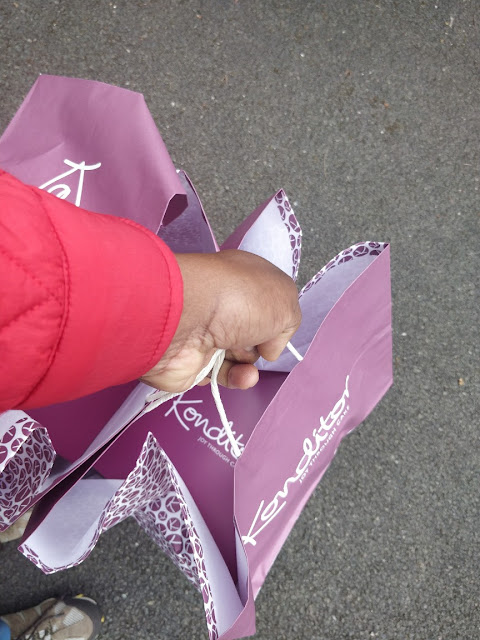 A few days ago, for a family get-together gathering, I got ordered two cakes from Konditor (formerly Konditor and Cook). In my opinion they are one of the best cake shops in London. However just a few days before the family event, it got cancelled because my cousin, the host, was feeling under the weather. 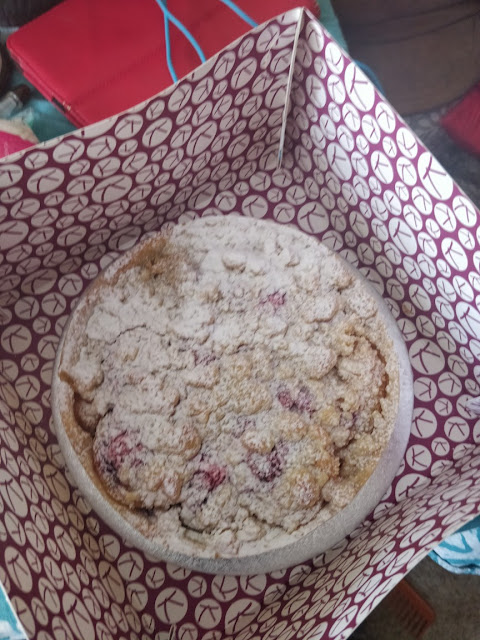 But yesterday, I collected them and took them over to my mother. Above is the summer crumble - which is a peach and raspberry crumble - very light and great for hot weather. I have a feeling that it was smaller than the shop pieces. That maybe they bake different measurements for the shop pieces (which is what I eat). Anyway it was a great hit with Sis and Big Momma. Its also what I have when I go past the shop - which is now and again, depending on what route I take. 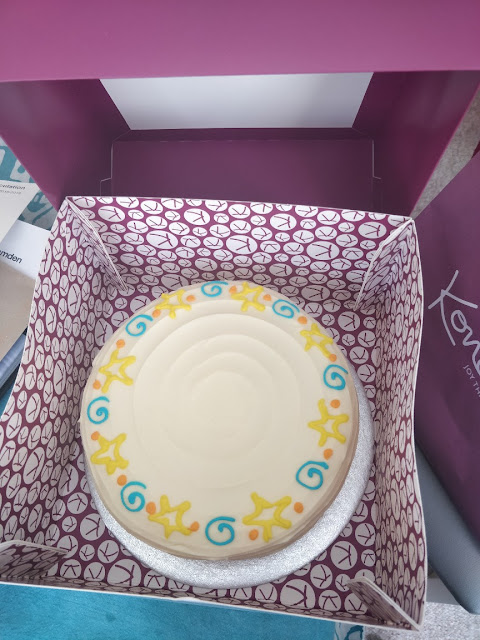 This is the popular Red Velvet, but it didn't taste like how it used to. Saying that, I haven't had a slice for about two years and I guess once in a while, cake shops may change their recipes. Plus the last Red Velvet cake from Konditor (then Cook & Konditor) I ordered was about three years ago, and it was much larger. And I stopped eating slices of Red Velvet about a year ago.

Saying that it was delicious and very filling so would have gone down a treat at the party, however next time, I'd probably go with a safer option of a plain Victoria sponge or carrot cake. I need to expand beyond Red Velvet and carrot cake - sometimes I get a plain lemon drizzle. It's just at times other cakes just seem too fussy.

So we enjoyed the cakes at Big Momma. I was actually thinking of getting some supermarket cakes on the day but opted for ordering. Tesco's finest range does nice chocolate cakes, and Waitrose first range does a delicious carrot cake. Sainsbury's ordinary range also does a nice chocolate cake is also very tasty. Some do a nice lemon drizzle which can be light for the summer. Anyway, I'm really into cake. I rarely eat Kipling though. They are exceedingly nice for others, not me. 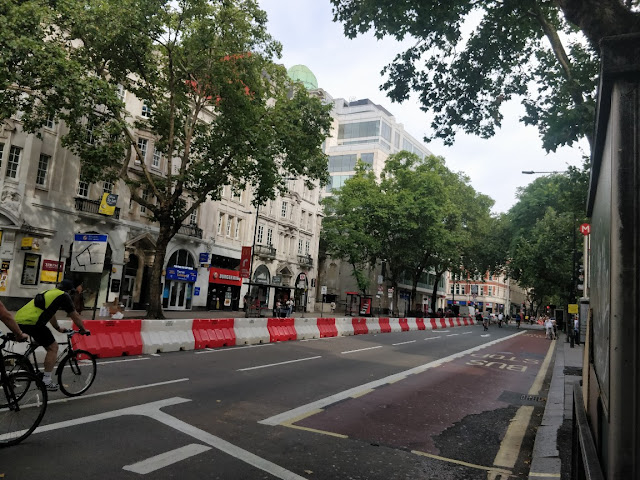 The whole of London was shut down for cyclists, and no, I'm not happy because it made getting my cakes from the Konditor shop difficult. My entire bus route was shut down. I wasn't pleased.  So I had  did a lot of walking, I guess you could say I needed the exercise but really? I don't think so. 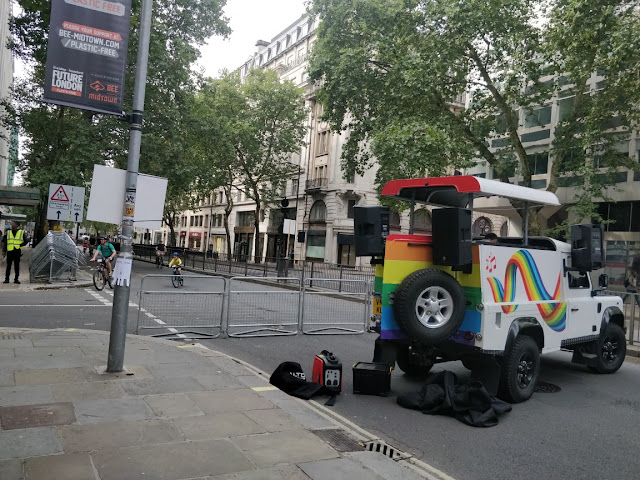 I just don't understand how they can shut down a major route for just leisure cycling. It was so irritating.  These guys in London Mayor office just don't think. They don't. What about people who work on those major routes or businesses. Sporting events are different because businesses get the foot traffic through their doors, but a bunch of dodgy overweight cyclists? Please. 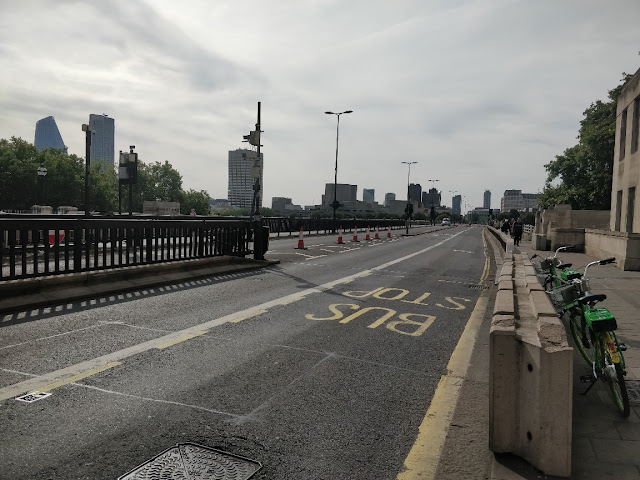 A Visit to Parliament Hill 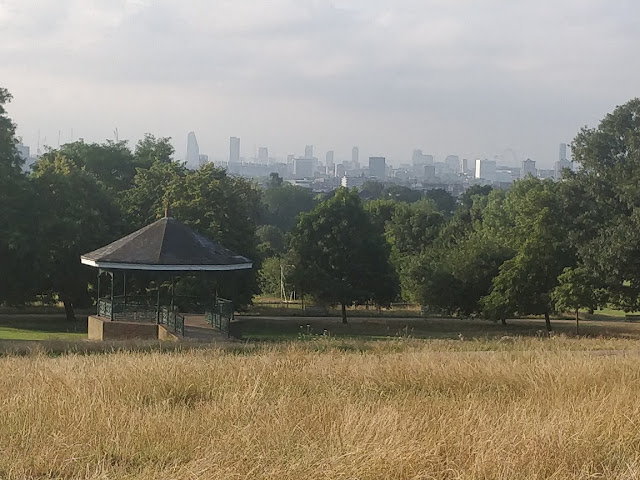 I had an early appointment in that part of North London. It's nice and leafy there. I got there too early, It was supposed to be a thirty minutes journey  however in peak traffic, last time it took me about an hours. Anyway, I got there very early and sat in the park for a while.

In the fair distance you can make out the London Eye or maybe not. I did but you can probably work out familiar shapes of the landscape from my other pictures. Again, maybe not. 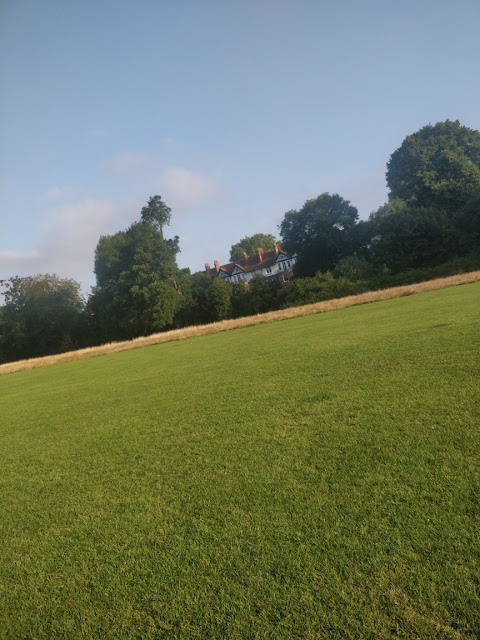 The Stone of Free Speech on Parliament Hill 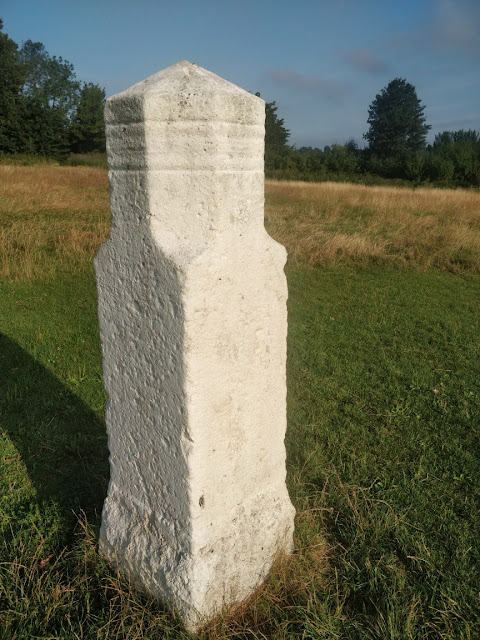 So I walked up the hill and was attracted to some stone structure. And looking at it now on Googgle says apparently it's call the stone of free speech. The stone seems to the shrouded in secrecy and controversy but yes that is the Stone of Free Speech. Apparently Parliament Hill used to be called Traitor's Hill.  How interesting. Nowadays I think modern Pagans now have gathering around it. Yeah, it it what it is.

Not to much to report. I'm probably going to be pushing back my publication to 2020 because I'm thinking of applying to a writing programme to finish it. The Holly Lisle How to Edit Your Novel didn't work for me. And that is a loss of about $400 but it's something I've wanted to try for years, nearly five years so at least my curiosity is out of the way. Expensive, but it's over.

I've looked at a couple of writing courses and programmes but they are either too basic or not what I really want. My second option was to try How To Edit Your Novel but the person I asked for independent feedback hasn't come back to me yet. On the other hand I met someone earlier in the year, who said it was great however it's a lot of money. Maybe I should chase up on the feedback. I know all courses don't work for everyone, but I'm dyslexic so I need to be careful, especially if the course is pricey.

I know I used the book, How To Edit Your Novel - which is very good but that is £14.99, and cheaper on Kindle. But you need to add a couple of zeros to see the price of the course.

The next course I'm considering is in lower end of that price range, is actually off-line in London. It also means I can ask more questions, as in the tutors are more accessible. Like you shove your work in front of them, or corner them at the break. That sort of thing.  Online courses can be quite rigid in the respect.

Also another benefit of off-line courses cohorts is that after the course you can meet up in a pub or coffee or something and form your own mini-critiquing group. I've been on an online one, The Curtis Brown,  that tried to do it the facebook way but it doesn't work.