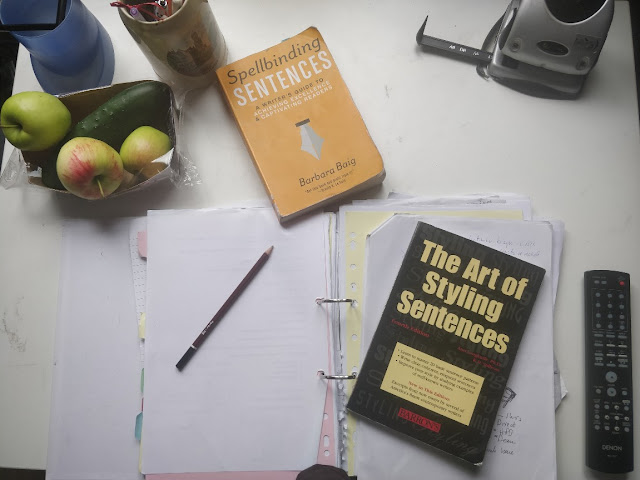 A fairly busy desk compared with previous weeks. So lets start with the folder. That is my one of my writing folders, I have a few scattered around my home. On the left hand side is a pencil, opposite is a famous text called the The Art of Styling Sentences. Yes, I figure I need a little more practice in writing clearer sentences in some of my scenes.

I had a conversation with Big Mama (my mother) about this writing lark. Before I just used to write a draft and go on to the next, but since publishing my books, I've had to really think about editing and making sure I produced a story to the best of my ability, and if you have followed me on the blog you'll know the this current manuscript has been a real task in time, money and effort.

Anyway, I've had this book for years but never used it - but then I had no cause to as the other stories just feel into place. Let's not digress, next are the fruit and veg my mother brought from her garden. Three apples (large ones) and a cucumber so I'll need to make some salad or use it in a smoothie.  She had a lot of apples but most were very small so the ones in the picture were the only 'apple-as-we-know-it' size. This is normally the case, I've worked in an apple orchard before, and what happens is  to get the supermarket (standard recognised) size the apples are thinned, is that the trees are thinned. 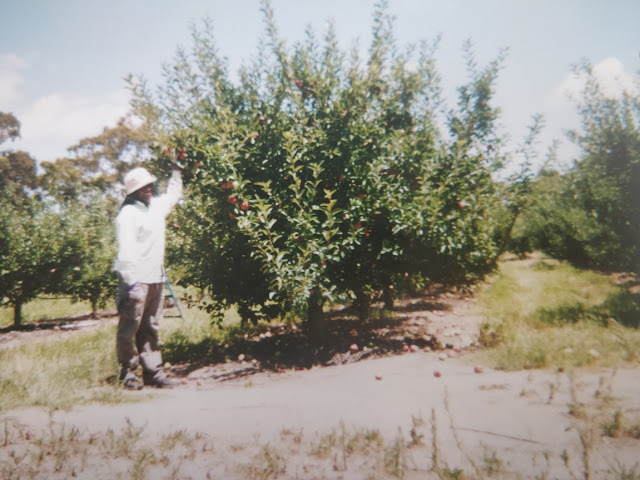 A throwback picture of me working on the farm back in the day in Queensland, Australia, you can just make out the ladder behind for the taller trees. So basically the farmhands (err...me...) would go round each tree and ensure that each apple had room to grow. So at times this would mean removing a cluster. So I was paid per tree. Basically I'd thin a number of trees and the farm supervisor would come round, inspect and approve. Then I'd get paid. I lasted all of two weeks before I headed off for greener (ha!) pastures...I headed off on a one way ticket west - not home but to WA! I mean Perth.

Back to my desk, next is the spellbinding sentence book, then the hold punch. I rescued that from the being binned and taken to the dump. It's preloved and now helping me with my masses of loose paper. After the hole-punch  is my CD player remote control. Yes, old school as I still like my CDs and I like playing music out loud. I'm damaging my eardrums for anyone.

I guess that's it!