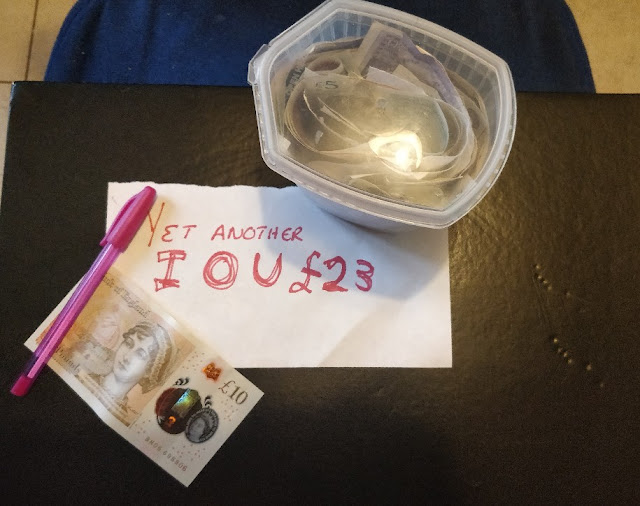 Week thirty three and  I can only spare £10 as my own funds are running low. So this means I'll have to owe the money jar, nothing new there. It will probably be like this until payday which is in a few weeks. Maybe I should call this the IOU game.

So I went to the cash point thinking I could withdraw at least thirty pounds but I only had forty pounds left in it until payday. This mean I had to be what accountant call 'prudent'. If I took out £30 - yes, I intended on owing £3, I would only have about £10 to live on until payday.

I've had a few expenses, like I decided to top up my oyster card, instead of using my bankcard. We are basically cashless in the UK. However I put on a fair amount, probably more than my monthly transport would cost. Then other incidentals which I can't remember.

Also I think because I'm now in the thirties so it's a lot of money. So it's getting harder, people, harder. I have seven more weeks in the thirty pound zone, then forty pound and finally it's going to be two weeks at the fifty pounds.

So it's getting expensive but let's see how far I can go. I guess in the end it's going to be cash and IOU.