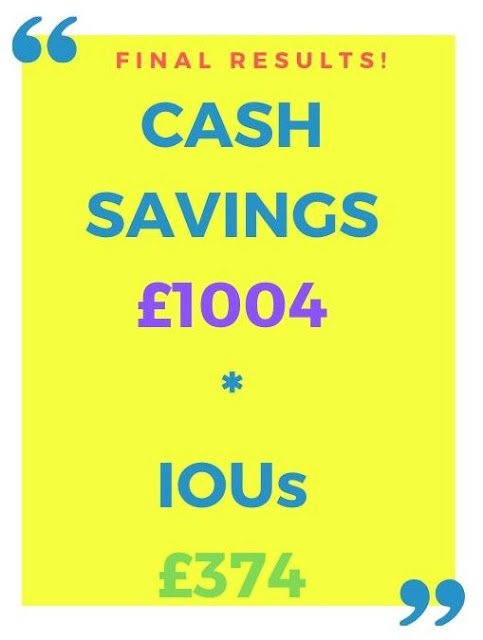 This isn't bad for a year's long challenge which has been tedious, cumbersome and boring! The final cash savings was £1,004 and the IOUs were £374. As frequently with this long term saving projects there was some double counting - I think mostly to do mixing up weeks so I had to got by the cash savings!

On Boxing Day,  I went down to my mother so she could assist in the counting. 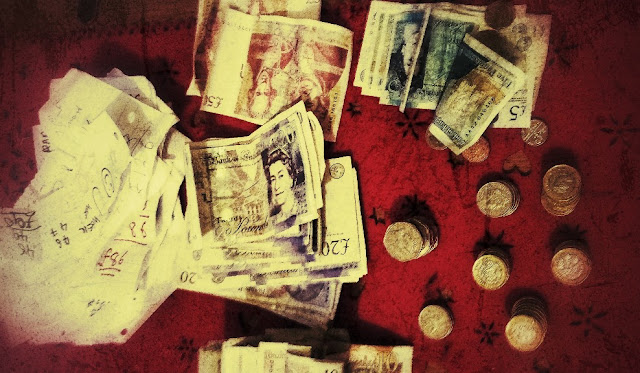 To help with this count down, I asked Ma who willingly obliged as she had been keenly reading my blog posts about this. Sis acted as an independent observer. Well she was on the sofa while Ma and I counted the cash and the IOUs.


At first there was a debate about what surface to use, and Ma and Sis advised it was best to use red since that represented money and wealth in many cultures, so that was taken on board. As a result we used the Christmas table runner. 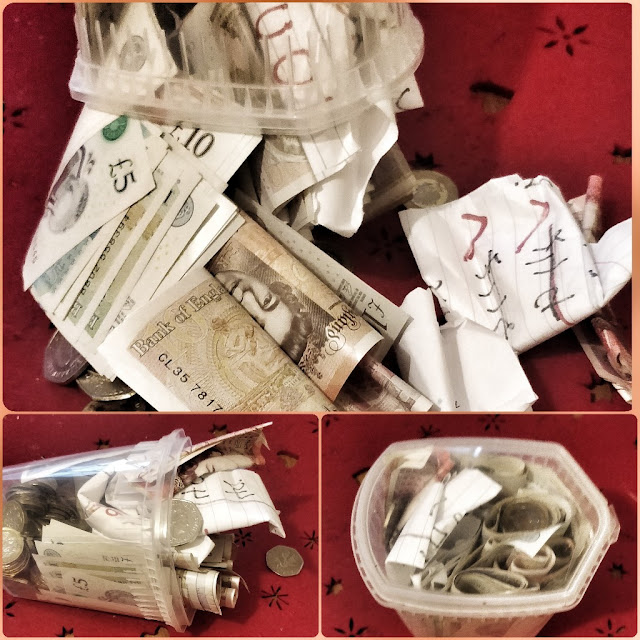 We poured the contents of the money pot on the table and proceed to sort out the cash in different denominations and IOUs.
This was how it looked on the table before we started counting. However because there were missed weeks and at times double counting - remember this was started on the 7th week of the year, it didn't really add up... 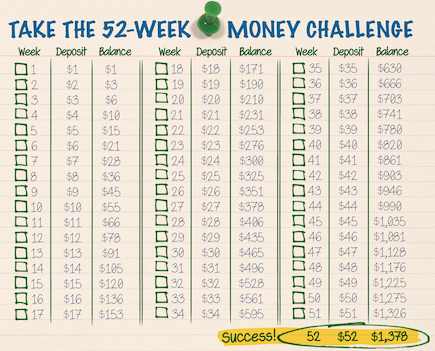 First I gave Ma £50 for helping count out the money so after that I had £954, which I wanted to bank however the most of the banks in my area weren't open, so after walking a while, I found an open branch but there was no counter service, just a deposit machine/ATM, so I could only bank the notes which came up to £910.

It was a very tedious process as the machine kept on spitting out the cash, until I entered the notes in seven smaller batches of the same denominations. Annoying.

Proof? Well the bank doesn't allow screenshots and the deposit machine receipts are too flimsy to take pictures of. I guess I could alway get one from the bank on a proper working day.

Final Thoughts Was It Worth It?

It depends, I guess it was nice to find out how much cash had been saved but to be frank, it was such a palaver and hassle even to the very end: from saving, to counting and even banking the cash. HOWEVER, one thousand pound isn't to be sniffed at, given it's a windfall after the big financial expense of Christmas.

I guess the key to this saving was keeping on, and I did that mainly because the blog held me accountable in some way. Even when I couldn't make the payments, I put in an IOU for part or all that I owed, doing this kept the pressure off me. I paid when I could.

I did push myself in the last  few weeks, so realistically, I probably would have saved about £700 rather than the £1,004. Still that is seven hundred quid. So I guess the big takeaway is saving what you can, and regularly. Over the year, this was regular despite the missed out weeks because I more or less made some contribution each month.

Thank you for following throughout the year.