Show me your desk - books by Stylo Fantome, May Sage, London Miller and Ivy Asher 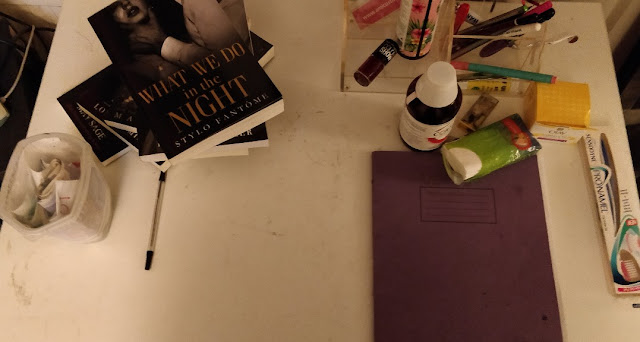 Back again after a break. So on the lower left handside of my desk is the money pot and a pen. Moving up is the stack of books I bought from the RARE 19 events. I bought books from Stylo Fantome, May Sage, London Miller and Ivy Asher - all of them gracious, beautiful and glamorously turned out.

Most of the  authors were all beautiful women - so RARE19 it could have easily been a social media meet and greet event of Youtube beauty influencers and creatives, only with authors and their books. It was a glamorous event with a good feel atmosphere so you can see why fans flock. It's a real day out!

These are all new authors to me as I attended the event out of curiosity. Last year, I happened to come across an indie author's page who had a blog post on it, so I found out more details and went.

There was no real method to buying the books, I just happened to arrive, and there where so many people so it was tables that really caught my eyes. The first was beautiful and glamorous Stylo Fantome and equally beautiful and glamorous her assistant. I approached the table and got talking to a fan who recommended a book which I bought.

After milling around, I had a chat with London Miller and her assistant. She explained what the term SAFE meant on Amazon, apparently it means no cheating. She also suggested two of her books, standalone so I got them.  Then I went to May Sage who also is stunning. She was talking to a friend who suggested what books I too. I'm not a big paranormal vamp fan so they gave me other suggestions - so I got her King of Ruin with is her first fantasy novel, and another novella Shy Girls Write Better. We got talking about book covers and she is very meticulous about her book cover process and she gets exclusive rights etc. Below is a picture I took for my post yesterday. 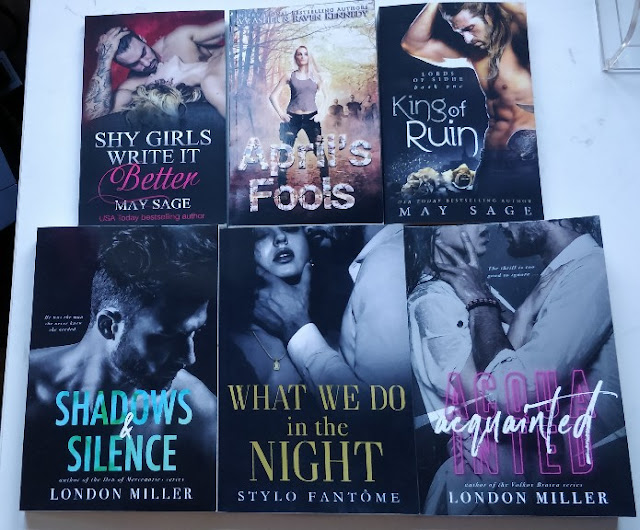 Her friend had just finished a reverse harem series, which I'd never read - I mean the genre so the friend recommended Ivy Asher who she called the Queen of Reverse Harems. So I found myself at her table and she recommended one of her books to try out, which was April's Fool, a collaboration with another author.  I guess that was my book haul, all signed by the authors.

Back to my desk, next is my pre-loved desk arranger which I recused from the bin. It had pens, a ruler, and some glue. Yes, my pen holder is gone, but I think this is much better suited. Beyond that coming down to the right hand side is a bottle of medicated mouth wash, a pencil sharpener, some face cream and a packet of tissues. After that is a sample toothbrush I got from my dentist. I'll try it out soon. Finally is my purple book which I just scribble notes in.