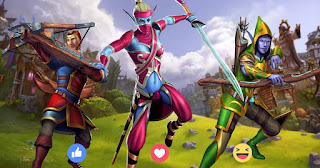 I am now of the one of the millions of addicted gamers. True. I'm playing a game called Elvenar which is a fantasy city builder. A friend of mine introduced me to it and since then I've spent countless hours playing it.

It's time like this, I'm happy I've got a day job as that gives me a rest. It is truly addictive however in  way it's a strategy game.

So it starts off very easy and progressively gets difficult. I'm on level two and this is where strategy comes in. And boy does strategy play a part.

I guess the aim is to build a big and powerful city where a owner or gamer can form alliances. I'm far from the level.

So in the beginning a gamer chooses to be human or elf, then from there starts to build. In each species you start from a village or hamlet status with primitive and rough looking dwelling to becoming a sophisticated looking city.

Expansion is based either getting parcels of land. This can be achieved by going into the wider world and having encounters where you can negotiate your way thorough or just fight. I started off negotiating until I realised it was costing me too much. Then I started fighting until I realise the armies were more overpowering than mine so I defeated in my battles.

Now I weigh each option carefully before choosing one.

After a while on the game, things become more complex because as a city builder a gamer needs to decide on a strategy since everything gets dearer that is more expensive. So does a Elvenar gamer have many little houses and workshop or upgrade. One costs land which means encounters, the other can be time consuming and still cost lots of supplies and money.

You can spend real money - in a form of diamonds. This is how the company makes it's money. Diamonds give more power and spend and some special advantages. You get about 200 for free but later you can buy via text message or mobile phone or credit card. Diamond work out less than a little less than a penny but the more you buy the less it costs.

At some point, I reckon most gamers would need to dip into their pockets to get some diamonds. For now I'm happy playing. Why? It's easy to play, even the fights are clean - there is an auto-fight option if you don't want to have a physical battle, and you think in the same.